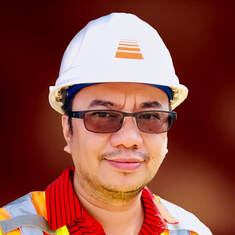 Mr. Cabrias is a licensed Civil and Structural Engineer in the State of California, Territory of Guam, and the Commonwealth of the Northern Marianas Islands (CNMI). Prior to all of that, he was first registered and licensed as a Civil Engineer in the Philippines after passing the licensure examination in November 2000 and ranked 4th Place nationwide with a score of 95.7%. For more information about his certifications, honors received, awards, and trainings, kindly check his Credentials section.

After graduating from college in 2000, Mr. Cabrias worked in a structural engineering firm owned by his college professor where he experienced how to apply what he learned from school to actual design in real world. Moreover, he and some of his colleagues helped Engr. Venancio I. Besavilla established and opened the Iloilo Branch of Besavilla Engineering Review Center, the finest review center for Civil Engineering Licensure in the Philippines. He worked part time as a review instructor during these early years of his career teaching surveying, transportation engineering and various structural engineering subjects.

From 2001 to 2004, Mr. Cabrias worked as a design engineer and design coordinator for Makati Development Corporation, a wholly-owned subsidiary of Ayala Land Inc. It was during these years that he obtained extensive training and experience which proved to be his solid foundation in the field of civil and structural engineering. During these years Mr. Cabrias took part time teaching job at Collegio de San Agustin, Binan, Laguna, Philippines where he taught College Physics for a Computer Science class.

In 2004, Mr. Cabrias established AMMA Engineering together with his college friend and classmate who was working on Guam during that time. With contacts on Guam and Australia, AMMA Engineering provided various engineering services to Smithbridge Guam, Inc. (Guam), Forest Construction Pty., Ltd. (Australia), and to local clients in the Philippines. Again, he did not get enough of teaching job and so during these years, he also worked as a part time review instructor for Besavilla Engineering Review Center, Manila and Baguio branches. AMMA Engineering operations continued through early 2006 until Mr. Cabrias was directly hired by Smithbridge and moved to Guam in 2006.

From 2006 to 2009, Mr. Cabrias worked as a civil engineer for Smithbridge Guam, Inc., a renowned construction company in Guam that specializes in large civil engineering projects. He was assigned to Rocky Mountain Precast, Inc., a wholly-owned subsidiary of Smithbridge at that time.

He worked as a civil and structural engineer at J.M. Robertson, Inc. dba. Amorient Engineering located in Tamuning, Guam, U.S.A., from June 2009 to August 2016. AmOrient Engineering has focused on projects for the Department of Defense throughout its existence on Guam. It has developed a good working relationship with NAVFAC Marianas and the various commands that they serve with engineering, construction, and maintenance services requirements.

On August 18, 2016, Mr. Cabrias established his own engineering firm, ASC Engineers, Inc., which was incorporated in Guam. The company obtained a Certificate of Authorization (COA) from Guam Board of Registration for Professional Engineers, Architects and Land Surveyors (PEALS). ​This certificate authorizes ASC Engineers, Inc. to provide civil/structural engineering and construction management services in the private sector, government of Guam and the federal government.
Profile | Credentials | Certificates